Beasts and Barbarians – The Isle of Woe

You had been traveling the trade routes of the Dread Sea for several weeks aboard the “Crow”, a merchant ship Captained by the Syranthian, Domito Berantios. The job was proving to be easy coin as the pirates you were hired to defend the cargo against were no where to be seen. En-route to the distant Tricarnian City of Princes a terrible storm fell upon the crew. During the night the ship was blown off course into a jagged reef. The Crow’s hull was ripped open and the ship went down in the murky depths. You managed to cling to some debris from the ship and held on for life as the cry’s of your crew mates began to fade in the distance. At some point during the night you came to rest on an island. Now, without food or water, can you survive the island’s dangers and find a means to escape?

Pregens will be provided.

This session will be run on the Fantasy Grounds Discord server: https://discord.gg/VKbhkSt 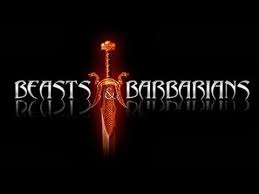 ← Blood Suckers
Costly Secrets – A Tale of the Sunfire Realm →

1 comment for “Beasts and Barbarians – The Isle of Woe”