The Maelstrom RPG and Maelstrom Domesday Fantasy Grounds Ruleset is now available for download. This is a community ruleset and is totally free to use. My thanks go to Ian M Ward and Trenloe for their great help and patience in helping me with my coding challenges and to Graham Bottley of Arion Games for supplying some of  the Artwork and Ruleset Direction.

Maelstrom RPG was first released back in 1984 in a paperback novel sized book. It has since been released in PDF by Arion Games and is available from RPG Now (http://www.rpgnow.com/product/54233/Maelstrom). Graham also produced the Maelstrom Companion and in 2013 ran a very successful Kickstarter to produce Maelstrom Domesday.

The original Maelstrom is set in the 16-17th Century in an historically accurate England – well historically accurate except there are no Firearms and there is a very subtle form of Magick available to some. The newer Maelstrom Domeday is set in England in the year 1086 and has characters investigation strange and unusual (supernatural?) events for their Norman lords.

This Ruleset does not have the automation that can be found in the core rulesets like Pathfinder and Dungeons and Dragons however it does facilitate all common rolls. 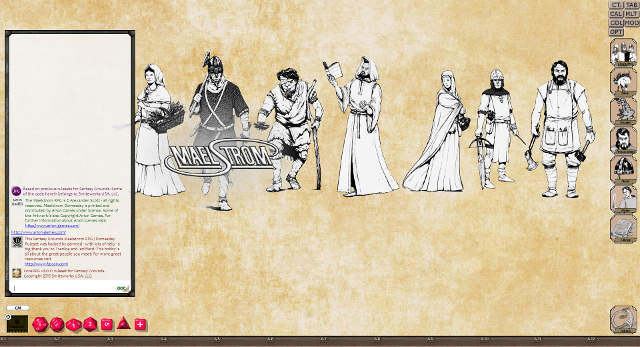 The Character Sheet has 5 Tabs.

The Main Tab has the following features: Ability Scores and Temp Ability Score. The Temp Ability Score is the actual current ability score and is used for most rolls. To perform a skill/ability check you are aiming to Roll Under your current score. once you have successfully used an Ability you mar it as Used. At the next break in action you may attempt to improve your skill in this area!

Specific Abilities and Livings are recorded on the Abilities Tab.

The Combat Tab has Weapon Attack and Defense Stats, Damage Dice and Range information. It also includes fields for rolling Initiative, tracking Armour Bonuses and Penalties and each Wound is tracked separately – and heals separately. Armour Penalties are applied automatically. After a successful attack roll the defender still has an opportunity to use his defense skill to block or avoid the attack.

There are differences between Maelstrom RPG and Maelstrom Domesday however the same character sheet may be used for both.

The NPC Sheet has 2 Tabs. Teh Abilities are all rollable from the NPC SHeet. Wounds can be modified from the Combat Tracker or from the NPC Sheet. Weapons should use the following syntax: Weapon Name [Attack Skill][Weapon Skill] (Damage Dice). 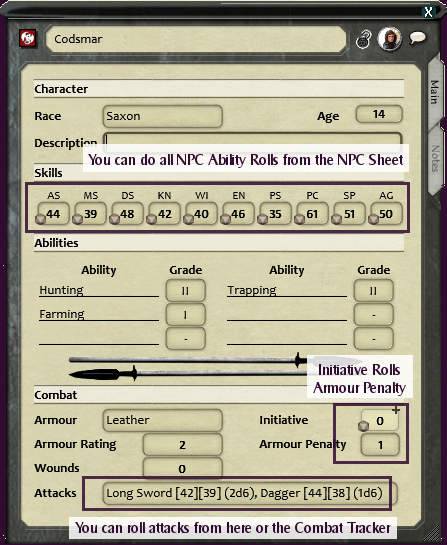 The Combat Tracker displays essential information such as Armour Rating, Wounds, Endurance , Initiative, Targetting info and NPC Attack Strings. Initiative is auto calculated at the end of each round. There is no automatic combat resolution or damage application. 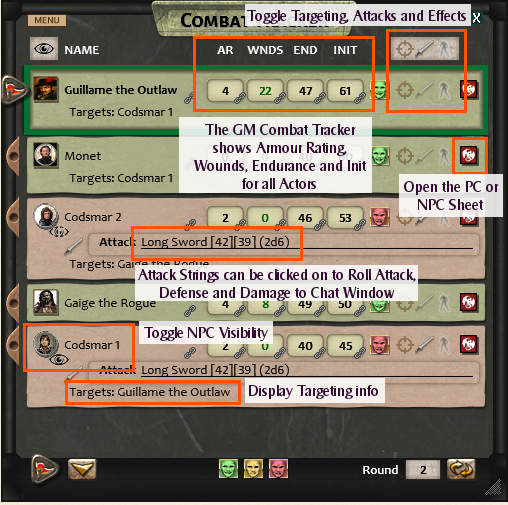 You will need a copy of either Maelstrom RPG  or Maelstrom Domesday to be able to run this game. They can both be purchased electronically from RPGnow.com