A Chilly Breach.  You’ve not long been at the Bloodeye Clan, the hobgoblin allies to the citizens of White Moon Cove (our frontier town), after having successfully delivered a load of the substance that creates the Golbin Elixir of Healing. 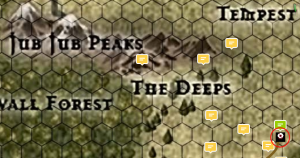 Word has arrived that Ferro has gone to the Jub  Jub peaks to look into tales of infamous ice breaches.  Our glorious mayor Barro has asked you to reprimand and bring Ferro back from his foolish quest; and to quell these rumours of ice breaches!

This is a level 2-3 adventure.

The Expedition to Sleeper Island is a D&D5e West Marches game based on the continent of Katashaka, which far to the southwest of Faerun. In this game the players take on the roles of explorers that have been sent to Katashaka by the scholars of Candlekeep. An outpost town has been established in this land and it is struggling to survive. This new world is harsh and unforgiving. The only information known about there area comes from the remnants of ancient scrolls discovered by Tabaxi in Chult. They tell of their people fleeing the land thousands of years ago after a great beast awoke.

Find out more about Expedition to Sleeper Island here: https://www.fg-con.com/expedition-to-sleeper-island/

This game will run on the Fantasy Grounds Discord Server: https://discord.gg/VKbhkSt