“Well, look what we got, some fresh meat for the grinder I’d say. No, don’t bother getting up kid, ‘cause those restraints aren’t gonna’ break. I know you’ve been on ice for a few years since your conviction.
Me, personally, I never thought freezing a guy until his time was up as much of a punishment. I mean really, what did you learn while you were a popsicle for the last 20 years? Now let’s get down to business.
I’m with SAINT, which is a real short way for me to say Sector Agent INtergalactic Taskforce. It’s a sort of special police taskforce. No, I know you never heard of it; the agency was created long after you
got iced.”

“Let me give you a quick history lesson, so you understand exactly why I’m here. First off, you know about the Armageddon War. You were on ice, so you’re lucky, you missed the big end of that whole shootin’ match. The short version is the Nahgatha; those big old ugly critters came out of nowhere to hammer all galactic civilization. They razed colonies and destroyed fleets so quickly we almost didn’t survive. Civilization, as we know it, only lasted because of new allies the Star Systems Alliance made along the way, pulling together to share resources and manpower.”

“What does that have to do with you and how does that affect you being here and now? Well, it has everything to do with you of course, just listen a bit longer. Once everyone picked themselves up and
looked around some decided to rebuild what there was before. Others, they found an opening to grab power and take control. Those who took the reins only increased their wealth. That’s when the Syndicate
rose up from the ashes and dug their claws into every politician of the outer rim worlds under their control.”

“The Syndicate today controls trade, resources, hell they control anything that moves through the outer territories. The navy isn’t strong enough to intervene in every pirate attack; the Star Marshals barely have the manpower to track and arrest the criminals they have on their wanted lists. That’s where you come in, well you and people like me. See, you did some real awful things and ended up here. You’re good, real good at breaking things, stealing and even killing. That makes you a criminal but maybe not a bad person. I read your files, and a lot of what you did was to survive where you were and things that happened around you. That doesn’t excuse what you did, but maybe it tells me there’s hope for you See, you have 25 more years on ice if I walk out that door. That’s 25 more years before you’ll see the light of day. Remember that daughter you left behind? She’s still around, in case you were wondering.”

“All right, I’m going to make you a one-time offer and if you say no we put you back in the cooler. By the time you get out, your daughter will look older than you. The Saints do the work that the regular law can’t or won’t touch. We get our hands dirty, we get bloody, and we don’t stop until we take down who we’re after. You used to do the things like that to make yourself rich, now you can turn that around and help us break the back of the Syndicate. You can choose to walk out this door and start making a difference or I deep freeze your ass again. What’s it going to be, forever a Synner or are you ready to be a Saint?” 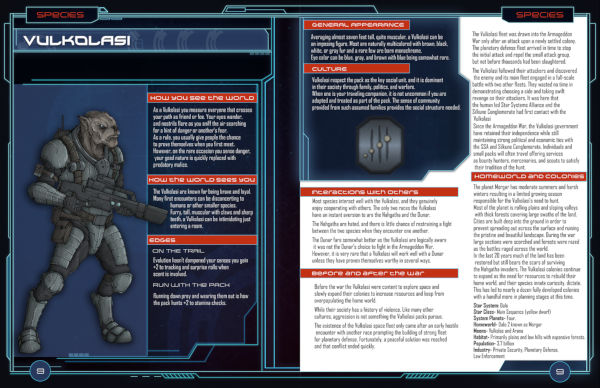 ← The Blight (Sunday Night)
Deadlands: Noir – A Face By Any Other Name →