Dusk City Outlaws is a tabletop role playing game for 3-7 players, set in the sprawling city of New Dunhaven. In this game, the players take on the roles of criminals on the wrong side of the law, collectively known as the Right Kind of People to those who run in outlaw circles. These criminals come together to form a crew, and take on a Job, a criminal enterprise brokered to them by a third party. 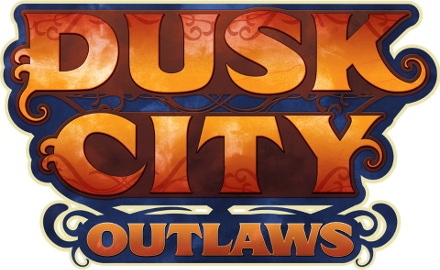 The crew is brought together one night by Yellow-Toothed Cyrus, a member of the cartel known as the Forgotten. He summons the characters to his “apartment,” located in an abandoned stretch of shops in an area of particularly poor and dangerous city slums. He calls the place his “Web” because the walls are covered with scraps of parchment, notes scrawled in charcoal, and a jumble of small objects, all connected by lengths of string that make the collection look like a paranoid madman’s diagram. Cyrus looks like a mad beggar, his clothes little more than rags that hang off him; he is perpetually filthy, his long, oily gray hair hanging down to almost cover his face. When Yellow-Toothed Cyrus speaks, he sounds as though he is constantly imparting great and wonderful secrets upon his listeners.

About the Game Session

Character creation will take place at the beginning of the session, and should take no longer than 5-10 minutes. However, to further expedite this I will have the FG host up and available 30 minutes before the official start time to give everyone some time to explore the options and familiarize themselves with the system’s rules and mechanics.

I’m hoping to get through the entire scenario in the allotted time, but this will be my first time running a game in this system. While the system does put an emphasis on role-play, problem-solving, and ingenuity, I will exercise my own judgment and may at times push the game along if I feel it is getting too bogged down in discussion.